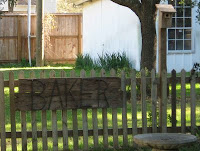 We had a great Christmas, we are so blessed to have so much and such caring family members. We had agreed ahead of time to make gifts this year, and a few of the great gifts we received from the kids are pictured. Lindsey made the sign in the first picture. She had requested stuff to do 'welding' for her birthday last year. This is what she made. I love it! 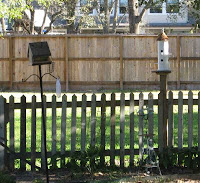 The next picture has a cool bird house- see the white one? Robert made that one. It's really cool, a little upscale from our other ones. Some of the black circles are 'blanks' . I'm waiting to see a unsuspecting bird fly into a paint spot. No, they seem to have it figured out that there are fake holes. At least I haven't seen any lying on the ground.
Today was another great day in Houston. Think I heard it made it up into the 70's. The sun was shining, and it was pleasant outside.
Spent a good portion of the day in my studio today. Got a couple more bookshelves to put fabric inventory in. Hubby forbid me to get any more shelves. Had a bit of a problem with the second one last night, and had to ask for his help putting it together. Everytime I would 'almost' have it together, the stupid thing would collapse. But, since he had his nail gun out, I drug the other shelf and let him strengthen it as well. Spent the rest of today cleaning and organizing my studio. Just have one corner that is still 'not organized' (meaning stuff in piles), but since I have Bee meeting there in March, I have a good deadline to get it done. We'll be having an all day sew-in, so I have to clear things anyway to make room for everyone.
Finished up a custom quilt and a t-shirt quilt for another customer this weekend. Don't get to count those as personal finishes. Hopefully, after the quilt show next month, I'll get a chance to work on something of mine.
Posted by Betty at 11:20 PM