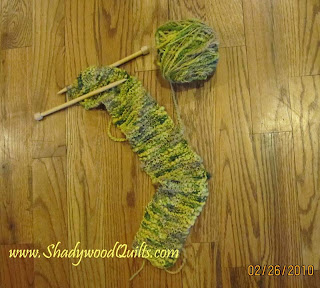 This is a great scarf for beginning knitters.  I have made several of these for gifts, and my friend Nita makes and sells these at craft shows.

GAUGE:
Exact gauge is not essential to this project.

NOTE: Boucle yarns work really well with this type pattern.  Combine more than one yarn to create more interest.  Use larger needles for a looser weave and more drape.
Posted by Betty at 3:39 PM No comments: 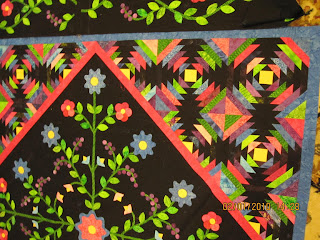 Finally unloaded the camera, and found pictures over the last month or so.  I really did plan to get pics loaded here, so there will be a variety of subjects today.
First - just a preview of our Donation Quilt for West Houston Quilters Guild (WHQG).  We're just finishing the last of the applique in the borders and it will be ready to go to the quilter.  Our quilt show is April 2011, so there are lots of details still being worked on.  The batiks almost glow against the black background.  The colors in the picture don't quite do it justice.  What looks red on my screen is actually more of a HOT PINK.
I think I mentioned earlier that I've started knitting.  It's about as addictive as quilting.  Afterall, it is fiber, and both are Fiber Arts!   One of the best ways to learn to knit is to just get in there and do it.  Now, you need to get in your rhythm and learn knit and purl stitches, stitching in the round and so on.  Well, the BEST thing to do with those first projects is to FELT them.  That way, no one sees your mistakes (what mistakes??)  Because, when it is felted, all those little goofs just melt away!  Gotta love it. 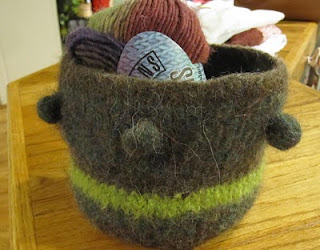 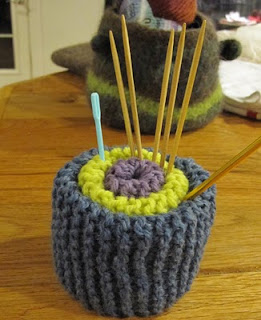 My favorite peice that I finished is a little basket. It's done with 100% wool, then washed in the washing machine with hot water.  This is made from Cascade 200 wools.  You can't really tell after it felted, but there is a stripe of varigated green/brown where the knobbie things are.
I have also made several of the obligatory Knit Cushion to hold Knit needles, and other tools.  I did add a 4th layer to the one shown, and made one in reds for my friend Michelle who is also learning to knit.  Nita - you don't get one until you learn to PURL! 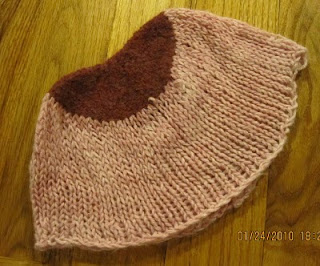 And last but not least, I have to show what NOT to use when felting.  If something says Super Wash, or is not 100% wool, it's not going to be successful.  The dark red is Cascade 200, the pink part is Lion Brand Wool-Ease.  It does not felt at all, and I have a beany sort of hat.  So, I would suggest the Wool-ease for Afghans or anything you want to throw in the wash.  I threw this in twice on HOT.
Posted by Betty at 6:56 PM No comments: 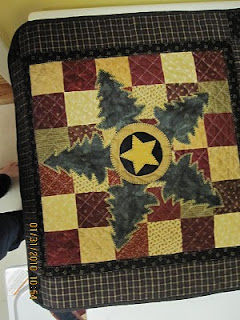 This little Texas Pine tree star is my first UFO finish for 2010.  Just barely in under the wire, and only because I had to turn it in on the 28th for the  Tri County Quilt show.  Nothing like a deadline to get things done!  (That's weird, this new camera I have dates the pictures to the date you download not the date you took it.  Probably need to read the book.)

Can you believe it?  This is actually HAND QUILTED!!  There is a little bit of blanket stitch and the applique is fused.  A first for me, as I usually do needle-turn.  Oh well, finished is better than perfection.  Did most of the hand quilting in the car on various road trips, which is why it fell into the UFO pile.  Started it a couple of years ago, and found it on a shelf in the closet.

Been doing a bunch of knitting.  Caught that little bug at Quilt Festival of all places!  Anyway, finished several 'little' crafty projects, and am working on a felted rug right now.  It is a quilt pattern (HST - half square triangles) and will show pictures when it is done.  Another of my quilting friends has also started knitting and has already finished a hat and a shrug.  Way to go Michelle!  I realize now that my ambittion to make socks last year was a bit much, but am confident I can do it this year.  Next year I plan to join the sock club at Twisted Yarns in Spring, TX.    Guess I'll have to start a UFO KNIT project list as well.

No new fabric purchased this week, didn't cut any fabric or use any, but did work on several swaps where I cut the fabric last week.  Most of the swaps are due later in February.  Will show pictures after we swap.
More later.
Posted by Betty at 10:12 PM No comments: