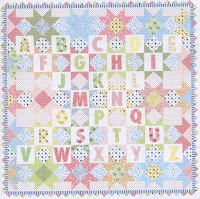 I had bought the fabric for this quilt back in March 2008 when we were headed for our retreat in Gaveston Texas at the quiltshop Quilts By The Bay. (This was before they got wiped out by Hurricane IKE). I had shown Rachael the fabric after I had bought it and told her that I couldn't do it for her first Christmas (Dec 2008), but would do it for her first birthday. Well, her first birthday was in September 09, but we were in Mexico then and I didn't get around to it. So, after I finished up all the customer quilts before Christmas, I got started on this one. This photo is the stock photo, I'll get an actual picture when we get back to home.

The other quilt that I got finished is a Disappearing Nine-Patch done in Greens and Chocolate Browns for daughter Lindsey. This one had been started at beginning of 2009, and since we didn't do Christmas on the 25th, was able to get it completed for when we did exchange gifts after Christmas.

I think these two are a great start for the new year. I didn't get to play with my quilting buddies who had a sew-in at Ann's house yesterday. Looks like I'll be participating in several block swaps in 2010. Hopefully they won't end up on the UFO list.
Posted by Betty at 11:31 AM

I came over to your blog from Barbara Brackman's blog where I saw your Civil War QUilt. She says the pattern is out of print. Do you happen to have your pattern?

I would love to make it in honor of family members who fought in the war.

Yes, I am sure the pattern is somewhere in the general vicinity of that project! I am a little further along on it than that picture shows. I have all the borders appliqued, but have not added them. --Betty