Back from Houston Quilt Market

Market actually ended last week, but I had to turn around and go back for Quilt Festival!  I love living in Houston, but trying to get to the GRB (George Brown Center) early in the morning is not the easiest thing to do, so we stay at the Holiday Inn Express, just south of the GRB. (Have to say they love having the quilters there and treat us right with cookies and milk and even a free Lasagne dinner on Friday night!).

Senses have in overload, but finally winding down.  Not sure about my sister-in-law from Cleveland who was a Festival Newbie this year.  She was pretty impressed even though she is more of a seamstress than a quilter.  We found plenty of yarn, fibers and 'bright shiny' things to grab her attention.  I didn't get much in the way of pictures, because my battery died shortly after we got there.

Sharon Schamber won Best of Show for a third time.  Never been done before!  Glad it was her- she is a nice gal and does spectacualar work with her attention to detail.  Look at those tiny herringbone areas around the trapunto.  And using BLACK thread.  The edging is three dimensional as well and there were open cutwork areas in the quilt. 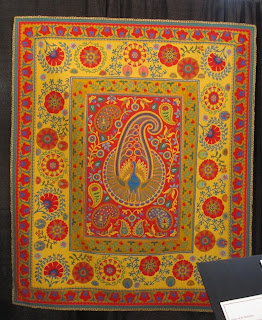 One of my other 'favorite' quilts that I saw during Market was this one on the right.  It was one of the big winners as well.  check out the colors! I don't remember who made it, but it was awesome as well.
I didn't buy much in the way of fabric - what a shock!  Really did stick to my assumption that I should finish up some projects before starting more.  Of course that does NOT apply to yarn.We went The Hen House ( a local shop) several times as well as many other yarn places.  All had lucious fibers.  I think Laurie got hooked on the Free Form Knitting concept and had several ideas running through her mind.
Posted by Betty at 7:38 AM

Thanks for the pictures. I agree. Sharon is a very nice lady, and very talented. She usually has a booth at the AQG (Phoenix, AZ) show, and has 8-10 quilts hanging in there. It's so wonderful to see them up close and have time to really look at them. The Paisley is quite stunning, too.